I’ve been touch-typing for a long, long time. I originally taught myself to touch-type on my dad’s old manual typewriter from college. I remember a time when pretty much all keyboards were metal and seemingly constructed to withstand a nuclear blast. I’ve always been pretty picky about the keyboards that I use, even going to the extent of learning the Dvorak keyboard layout. But it wasn’t until recently that I really started pining for the old mechanical-switch-style keyboards that have come into vogue. I like the clicky-clack of the old keyboards … and it wasn’t until people started pointing out that old keyboards truly were different that I took a look around and decided to do something about it.

I eventually settled on the das Keyboard. Partially it was because of the attention to detail. Originally they touted that the various keys were loaded with different resistances depending on how strong the finger was that was intended to operate it. Partially it is because I could get the same keyboard in loud or quiet form. But eventually, it was because it was one of the few mechanical keyboards that offered a Mac model that said it would work with the various Mac function keys like volume and brightness control, etc. Also, they offered a key puller to let you rearrange the keys so that those of us who use a Dvorak layout could actually have the keycaps displaying it.

I got my new das Keyboard for Mac yesterday and have been playing around with it for a bit. I immediately pulled all the keycaps off and reorganized them. Despite seemingly encouraging exactly this practice, it seems the keyboard isn’t designed to pull the caps off and rearrange them, just clean under them. 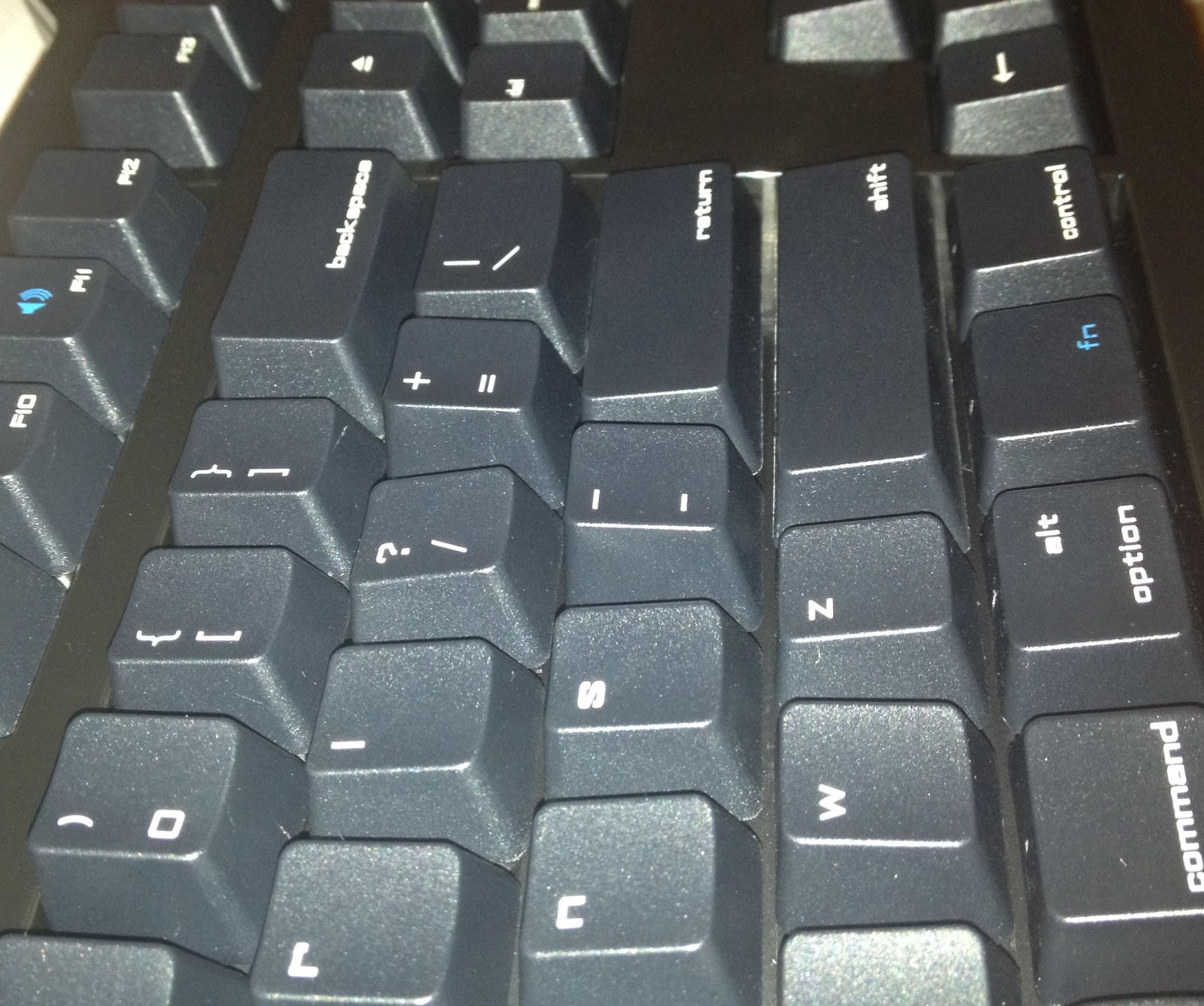 It’s fairly easy to see that the “?” key and the “-“ key are a little out of plumb. What’s less obvious is that the bracket keys are a little shorter than their horizontal neighbors. None of this has affected my typing so far or irritated me, but it was one use case that I thought I would have and don’t seem to. Had I known, I’d have thought more about getting the blank keycap version.

On the positive side, the keyboard is solid. It is heavy and feels like it could withstand a nuclear blast … except all the plastic keycaps would melt. But it feels like the innards would be fine. And it feels like it will last a long, long time. We’ll have to wait and see on that count.

Despite being heavy and solid, it is not bulky. The desktop footprint is only a little larger than the Apple Keyboard with Numeric Keypad that I had been using previously. It also has two USB ports in it, like the Apple keyboard. Unlike the Apple keyboard, they are full power so they can charge an iPhone. The das Keyboard manages this by having one USB cable with two plugs. One for the keyboard and one for power for the hub. If you don’t need to charge things with the USB ports on the keyboard, then you only have to plug in one of the connectors.

Overall, I’m pretty satisfied with the new keyboard and its ultra-clicky sound … just like I remember it. We’ll just have to wait and see if it stands the test of time.